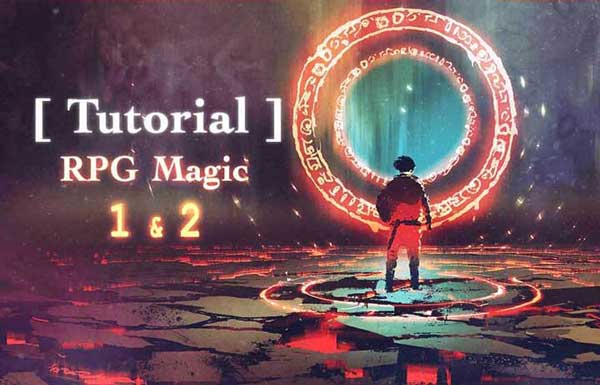 How to use our Magic Sound Effect Series: What does the layers and naming convention mean?

How Does it Work?


Let us quickly run through what went through our minds while designing these spells!

We wanted to create our magic sounds in the various short section so you can mix and match any magic sounds to sync to your animation. Usually, the magic sound effects we created for our clients come in 1-3 different parts and more depending on the nature of the spell.

Have a look at this gif from the game, The Alchemist Code. In this example, I would likely separate the magic spell sound into three parts. Part 1 – ‘Cast’ sound is triggered when the character cast the spell Part 2 – ‘Shoot’ sound triggers when the spell is shot Part 3 – The ‘End’ sound could be a buff, a debuff or a heal sound depending on your magic spell. If the spell hits a target, I will chose an ‘Impact’ sound! 🙂

We will advise triggering the sounds in parts so it syncs better to the animation. Having one long audio file to playback the whole magic animation can easily go off-sync when the game lags.

→ For the first category of sounds – ‘Basic_Attacks_Impacts‘ folder

The sounds in this folders are mainly for ‘impacts‘/(Part 3) in a game, and the swooshes are for when the spells are being ‘shot‘(Part 2). Most of the sounds here have a few similar variations so that it wouldn’t sound too repetitive when the sound gets triggered often. Although it may be the same action, usually there will be a few sound variations for each action, or you could change the pitch slightly in your game engine to create variation as well.

→ For the second category of sounds – ‘Spells‘ folder

The sounds here are the main building blocks for creating the magic spells.

They are more for notifications in games as suggested by the name of the sound file. We also threw in a piece of free music to help you get started on your game!

For RPG Magic 2, it has the same concept as the first magic pack, but with even more designed parts and elemental sounds.

In this new RPG magic 2, we also designed many more retro magic sounds like in the earlier Final Fantasy series such as FF7-9. We have more designed magic sounds with even more different parts and even combo sounds, which we will be delving into greater details!

→ For the first category of sounds – ‘Basic Whooshes‘ folder

Similar to the ‘Basic_Attacks_Impacts’ folder in RPG Magic SFX 1. The sounds in this folder are an expansion to pack 1 and is also mainly for ‘impacts‘/(Part 3) in a game. What’s the main difference in this new RPG Magic SFX 2 impact folder, is that we included ‘Combo’ sounds. Sound files with a ‘C’ at the end means they can be used as a combo sound progression.

These spells were designed based on two different Game FX Showreel. Each of these magic spells has a ‘FULL‘ version where all the sounds are combined into one long wav file, and their various sound ‘parts’ and variation. It’s up to you if you want to use them all together or as a single magic spell or mix and match them and combine them with other sounds from other folders!

Some of the files also have the word ‘Cast‘, ‘Shoot‘, ‘Impact‘ in them which works the same way as mentioned at the start of the post.

The spells in these folders are inspired by magic spells found in Japanese RPG games in the 1990s. The ‘P’ in the P1-P4 of certain sound file stands for ‘Part’, it’s a suggested order you could use to craft your spell. → ‘Part 1’ would come first and ‘Part 4’ would be triggered last within the same spell. The ‘v’ stands for variation of the same spell, for example, ‘S2_Medium_End_Impact_2_v1’ and ‘S2_Medium_End_Impact_2_v2’. The sound is similar but with a slight variation.

To help you get started, we group some suggested magic sounds that works well with each other. S1 to S7, sounds with the same prefix has a similar sound theme

→ The final category of sounds – The ‘Elemental_Magic_Layers_Impacts‘ and ‘Misc‘ folders

We added some elemental sounds to this sound pack, they are pretty straight forward as suggested by the names. There’s some electric, fire, plant, water and wind sound for you to layer them on top of any magic spells you have created or use them as a standalone skill. The Misc folder includes notification sounds like UI Skill trigger (think Disgaea 5, a skill trigger SFX is played before a character cast a skill), MP potion, Hp potion, and Epic Boss Death SFX (imagine wind and magic circling the final boss as it breathes out its last breath!)

Lastly, we have RPG Magic 3 [Elemental]

The FULL versions, casts, ends, impacts works the same way. However, in this RPG Magic 3, we categorized the sounds by elements. We envision each magic element as a RPG game character with a variety of magic spells from basic attacks to normal to epic spells.

Each magic element has a comprehensive set of 70 - 80+ sounds, ranging from casts, buffs, debuffs, basic attacks, critical impacts, projectiles, attack missed, and unique elemental spells, all within a folder.

In this video, we’ll show you how we choose, edit, and layer our sounds from the RPG Magic Sound Effect Packs!


That’s all we have for the tutorial on how to use the RPG Magic sound packs! A final tip on how to design a nice-sounding magic spell is to let your sound combination have a good balance of the low, mid and high frequencies unless you are going for a dramatic effect!

We hope that this tutorial has been useful to you and if you still have any questions, feel free to email us at [email protected]! 🙂