Features Nostalgia 8-Bit Magical SpellsInspired by Final Fantasy Series 7 to 9, Disgaea 5, and many other JRPG and MMORPG Games
All the magic spells you need to kickstart your magical adventure

Inspired by Genshin Impact, Video Games and Japanese AnimesEach magic element comes with a variety of spells ranging from basic to epic. All these magic sounds are specially created and meta-tagged to be modular – Use each recording standalone or as a building block to craft your unique spells!

“Professional and very pleasing SFX for spells, skills, monsters and more!
I especially like the Positive and Neutral impact SFX – they can be used for many things.” – OrfeasGS

“With large sound effects packs, we realized we were spending way too much time crawling through them for the right sound and in most cases
they are too generic for fantasy game use. This pack is made specifically for spell effects and it does what it says.” – GamenamiGames

“There are so many places I’m planning to use these sounds and esp for an RPG I can’t find something that’s not useful.
I geek out with audio and this has me so excited! 10/10 <3” – kmitchell.12catblackstudios

While a lot of sound packs have a very digital feel to them, these effects all have a natural sounding element to them that makes them just feel good. There's also a subtlety to the sounds (hard to pick out on the video/soundcloud tracks because of the music).  Instead of hitting you over the head, the differences in magic schools are just enough.  It's a good example of trusting your listener to pick up on small cues.

Verdict:  If you want a higher quality pack of magic sounds, this is it.” - Rootbeard 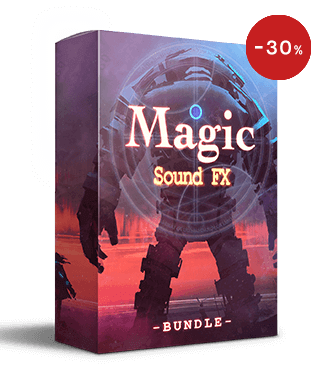